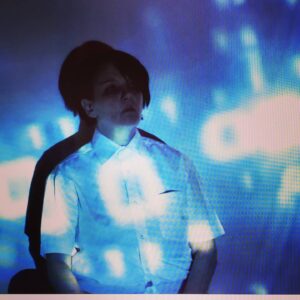 JE Solo is a writer, performance and media artist, and musician best known for their work in East Coast music, and as a trailblazer in machinima, hybrid-reality, and live and networked performance art.

JE’s first novel, Phreak (House of Zolo, 2020), was short-listed for the Writer’s Alliance of Newfoundland and Labrador’s 2017 Fresh Fish Award, and is the Write Project’s 2020 Book of the Year. JE’s most recent publication is a mini collection of short stories: Edge: Three Short Stories.

JE is the recipient of the Media Arts Prize and the Dramatic Script Prize from the NL Arts and Letters Awards; the Linda Joy Award from the Atlantic Film Festival for their screenplay, the machine; and the East Coast Music Association’s Stompin’ Tom Connors Award for their accomplishments in music. Dozens of JE’s stage plays, videos and performance art works have been presented across Canada and around the world including at ISEA, File Electronic Language International Festival, The IOTA Institute, Womxn From the Future, Courts Critiques, Festival of New Dance, and the 7a*11d International Festival of Performance Art.